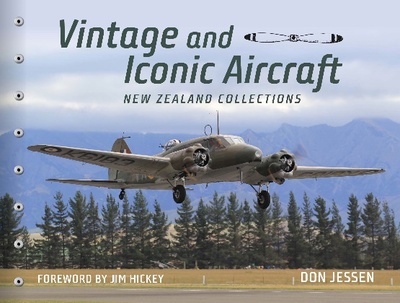 Vintage and Iconic Aircraft - New Zealand collections is a snapshot of how much we love to fly, of how much our country was made for flying, and is a wonderful "pilot's pot-pourri" of pictures and rich little stories.' - Jim Hickey New Zealand is home to a world-class collection of iconic and vintage aircraft. Don Jessen profiles more than 60 aircraft, tells the tales of the pilots who fly these vintage machines, and showcases some of our excellent aviation museums, including Sir Peter Jackson's World War I collection. Starting with Richard Pearse's story and a faithful reproduction of his plane, Don includes the fighters of World War I, and the civil aircraft of the thirties, including the DC3, the Waco and Tiger Moth. Moving to the bombers and fighters of World War II, he includes, amongst others, the Hudson, the Spitfire, the Avro Anson and the newly restored Catalina Flying Boat, and iconic post war aircraft such as the Hercules, the Orion, the Yak 52, and several jet fighters. 'I have met so many incredible characters and brilliant pilots, who have built stunning reproductions of vintage aircraft, restored original aircraft, and collected and fly wonderful old planes,' says Don. 'They are a breed apart. Just watching these aircraft fly can transport you back in time, and you wonder at the technology of the period, the bravery of the pilots, and what it must have been like to have been a pilot or aircrew in those times. My father was an aircraft engineer in World War II, and worked on Tiger Moths, Kittyhawk fighters and Hudson bombers, and my uncle was a Lancaster pilot. I grew up listening to fascinating stories about these iconic aircraft, and recently I actually sat in the remains of the Hudson bomber we believe is the plane my father was shot up in.' Vintage and Iconic Aircraft also features New Zealand's three major airshow events. Sir Peter Jackson's passion for World War I fighters and The Vintage Aviator Limited have produced an internationally recognised collection of aircraft from this era, which features in the Wings over Wairarapa Airshow. The Classic Fighters Omaka Airshow and Warbirds over Wanaka Airshow draw enthusiasts from around the world and frequently feature The Roaring Forties Harvard display team, based in Ardmore, and the Yak 52 aerobatic team.